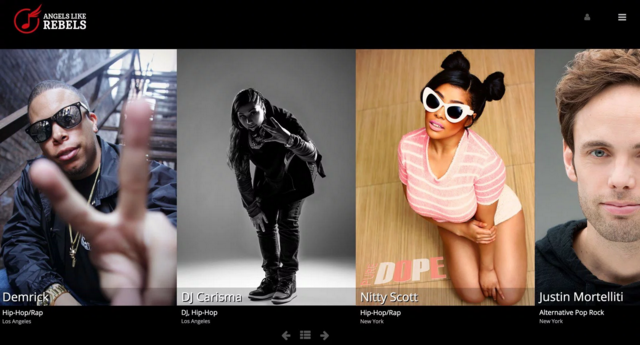 The company is made up of what most music industry execs would call ‘kids’, and their new model is quite interesting. On November 5th, the company launched it’s first round of artists in which all of them are trying to raise $200,000 dollars for their first project. The list of artists goes across the board from Pop, Rap, Rock, to niche genres like Alternative Soul Pop, Opera-Chic, Avant-Garde Pop, Dance, to Comedic Pop and Nerd Pop and even includes an artist that does, “Powerful Inspiring Storytellin.”

The artists that reach the funding goal will then join the label to record and release their albums under major distribution and other unique outlets. All the artists have complete creative control to do what they wish with their projects, and they will also have access to one of the many studios that Angels is in the works of building right now.

The difference between Angels Like Rebels musicians and a normal Kickstarter or IndieGoGo crowd-funding musicians is that fans who back their artists actually get a share of up to 20% of the net royalties earned by the artist they back.

It is a unique business idea, and now that is has launched it seems the sky is the limit for this company.

“The music industry is looking for a new business model. We offer a solution,” says Alexander Volgin, the label’s 20-year old founder.

This isn’t just an idea, it is a music label at the core, and that means the focus is on the musicians. Angels Like Rebels held open auditions across the country for the last year looking for talent.

“It is about the music so we wanted to find the best, unsigned musicians. It was an important part of the process, and our lineup of musicians on this first round of funding is just filled with great artists,” said Casey Eichner, Vice President of Business Development for Angels Like Rebels.

A music label that is really trying to find the best musicians in the country, and they are giving the fans a chance to earn money with them? Angels Like Rebels might be onto some thing!

Head over to AngelsLikeRebels.com now and take a look at what might very well become the future of the music industry.