Mist.io is a “one-stop shop” for infrastructure management. It provides touch-friendly interface for managing, monitoring and automating virtual machines in public or private clouds, docker containers and bare metal servers. It alerts the users so that they can address operational issues from anywhere, using any web device.

Mist.io is a freemium service with an open source software component that aims to become the “de facto standard on multi-cloud management” and a broker of cloud computing services. The goal is to democratize the cloud by making it more accessible and reducing vendor lock-in.

Cloud computing has changed the infrastructure landscape. It is now quite common for a company’s infrastructure to depend on a mix of bare metal servers, public and private clouds and other forms of virtualization like docker containers or KVM hypervisors. Mist.io offers a single UI and API to manage all of them. It reduces UI fragmentation, resulting in a more efficient workflow and decreased costs. Additionally, Mist.io provides monitoring solution and emits actionable alerts. The system administrator will be notified if there are any issues, and he/she can quickly and securely connect and solve them from any web device. “What makes Mist.io beautiful is that it only takes a few minutes to set it up and it makes a sysadmin’s work a lot easier.” Mike tells us. 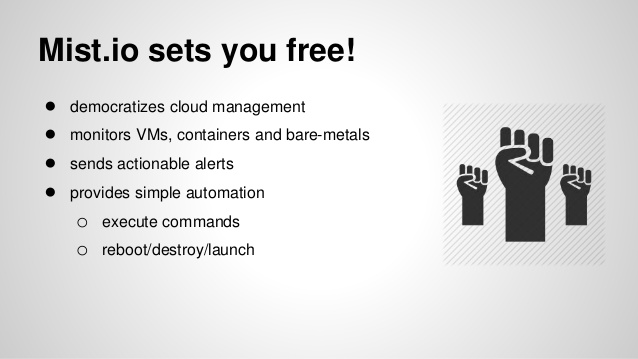 Mist.io was founded by Chris Psaltis, Dimitris Moraitis, Mike Muzurakis and Markos Gogoulos. Mike studied Industrial Administration and Philosophy of Science, but has been working as a freelance developer since 2000. He met Dimitris around 2002 and through him, he eventually met the rest of the team. Christos and Dimitris have been friends since their primary school days. Before they launched mist.io, they had their own consulting company called unweb.me.

“Τhe idea to build mist.io sprung from our own needs.” says Mike. He adds, “We have had a software consultancy called unweb.me and we’ve been building and supporting systems for our clients on several clouds. We were a small team and it was not possible to have somebody in front of their computer 24/7. It was even harder when one or more members of the team were on leave. We tried to get the job done using our smartphones and tablets but we realized that it was not possible without big compromises. So, we thought, why should we not make it possible by building a tool that lets you act upon alerts from anywhere you are, no matter where you host your machines are?” Thus, he says, “Mist.io was born!”

The biggest challenge for the founders has been Bootstraping. They had to bootstrap their way into a prototype good enough to get funding. This meant having to “juggle our consultancy work along with developing Mist.io.” They eventually decided to focus on their startup and although they had to face financial issues initially, it later paid off.

Some of the competitors for Mist.io are successful monitoring services like CoperEgg and New Relic. “There are also some big cloud management services like Rightscale and Scalr.” says Mike. However, he adds, “But Mist.io, takes a unique approach of combining management and monitoring, while making it accessible from any device. Setting it up takes a few minutes, while no proprietary blobs get installed on your servers (Mist.io uses the open-source monitoring agent collected). On top of that, the management interface is open and can be installed on premise, which is essential for certain types of businesses.” 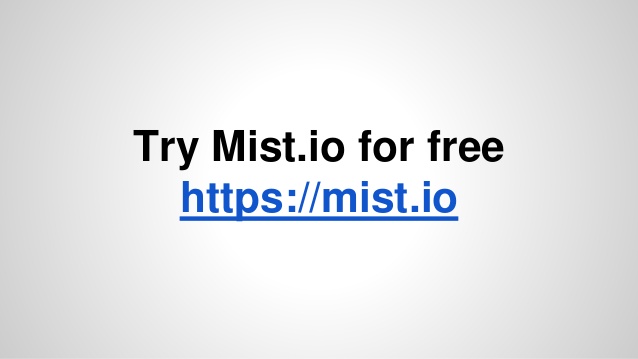 Since the cloud services market has been growing exponentially for the last 5 years, the founders find it hard to predict how big Mist.io will eventually get. “Our goal is for Mist.io to become the standard on infrastructure management and monitoring.” Mike tells us. Mist.io is about to complete its first proper seed funding round (angle investors included) in the next couple of months, so the founders are confident of expanding both the development and the sales team. Also, support has been added for many new providers and new types of virtualization. Support has also been added for script management and Mist.io looks forward to expand on that, with a view of supporting more types of workflows.

Mist.io’s users range from freelance developers to enterprises. “Most of our clients come from the US.” says Mike and “probably due to the fact that they are more flexible and willing to try new solutions, a big chunk of our userbase are other startups.”

Mist.io uses a freemium model for monetization. Server management (provisioning new servers, rebooting, tagging, web shell access, etc) is free, while more advanced features like monitoring and automation come with a price. “This helps us build brand awareness and increase adoption among developers and sysadmins, while generating revenue from smaller and bigger enterprises.” Mike tells us.