Have you ever spent excessive money on your mobile phone bills when you traveled out of your country? Are you fed up of those roaming charges every time you get a phone call from home when you are on a business trip? Well, next time, just download the Roamer app and say bye to excessive spending on your phone bills.

With Roamer, travelers can make and receive calls on their mobile phone over Wi-Fi or linked to a local SIM card at a tiny fraction of their network’s rates. “We give back to communication its deserved share in the travelling experience.” says Nick Ustinov, one of the founders of Roamer. Roamer app was co-founded by Petr Antropov and Simon Rabin.

Nick, Petr and Simon are experienced serial IT entrepreneurs who were behind odnoklassniki.ru, inbox.lv and megogo.net. Nick and Petr are originally from Latvia and know each other for “quite some time” whereas Simon is based in London and joined the rest of the team one and a half years ago specifically for the Roamer app. The team has 10 people today. 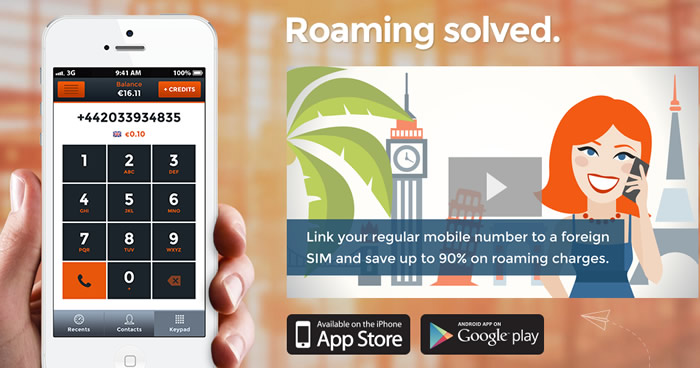 Nick reveals that it was his own bad experience that made him think of developing an app to let people use their smartphones abroad as freely as they do back home. 3 years ago, when he stayed in Thailand, he had to spend “outrageous money for receiving calls” on his Latvian mobile number. “The mobile roaming rates remain outrageous both for voice and data.” he says. He adds, “Insufficient competition stemming from the structure of the global mobile market does not push rates lower. Even intra-European roaming is still there. Instead, local competition in most of the developed and developing countries is strong and has already brought to users, unlimited voice and data in monthly plans costing as low as single digit EUR amount (e.g. Latvia). What we do is disrupting the barrier, letting users travel abroad and enjoy local rates for voice and data simultaneously staying connected with their mobile number.”

Roamer app is available all over the world. However, the developers had to tweak the app according to the peculiarities in different parts of the world. “So far we feel we have done a good job. However the challenge is still to spread the knowledge of our exciting new app among travelers from a greater number of countries.” Nick tells us.

Roamer’s competitors are mobile operators and VoIP applications. Since the mobile operators haven’t been necessarily decreasing roaming rates and are even increasing the rates sometimes, they do not pose serious competition. At the same time, the low-cost VoIP applications do not offer the full functionality of Roamer and are focused more on messages and stickers, free Internet video and voice calls from user to user. Roamer, on the other hand, focuses on phone calls that use phone numbers. “We feel our niche will be safe for some time for sure.” says Nick.

Roamer app currently has around 200,000 registered users and are looking to have 1 million users by the end of 2015. “We have translated the app and the supporting website into 7 languages and are looking forward to adding Chinese, Japanese and Korean in the nearest future.” Nick reveals. He adds, “We are constantly adding functionality and improving the user experience and are planning to release a major update in 3-4 months.”

Although the target users are primarily travelers, At competitive rates, Roamer also targets users who make phone calls to other countries.

When we ask Nick on the monetization plans, he says, “We are already monetizing what we can as we are selling minutes of calls to international phone numbers. We sell local prepaid SIM cards as well and plan to offer a more integrated solution of the app and a universal SIM card. This is where we need the next round of financing.”

Go get the app for your Apple or Android device! Visit https://roamerapp.com for more information.

Written By
Vineet Vinod
More from Vineet Vinod
Jordan Succar wanted to prank his friend Florent, who is an “Amazon...
Read More